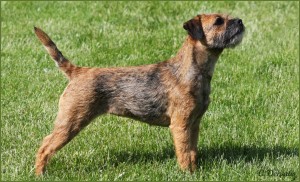 Belle whelped her last litter on October 13, 2013.  And for an encore, the litter was simply outstanding.  They were sired by Ch Kandu’s Marathon Man.  I kept a daughter from that litter that is now living with the Sorensen family.  “Meadowlake Frankly Scarlett…”  Belle was the dam of many outstanding offspring and I consider one of my strong foundation bitches.  Some of them include BIS BISS GCh Meadowlake Pants On Fire, GCh Meadowlake I’ll Have Another, Ch Meadowlake Gentlemen Prefer Blondes, Ch Meadowlake Smash, just to name a few.  She consistently produced her outstanding side gait, great shoulder and zest for showing.  She lives with us just enjoying the good life!  Belle is owned by myself and Tom Bradley.

In the show ring, well, it was her show.  When she entered the ring, she pretty much took command.  She never had a consistent day. but was always a show stopper.  If she was up to her antics, you better hang on, you were in for ride.  But she loved being an actress.  What most people don’t know about Belle is that when she got out of the car at a show, she became a star.  She put on an act that astounded most.  She was all terrier, which earned her a reputation as being a devil.  That was such a fallacy, as the people that really knew her, knew her when she was home with her make up off.  She was kind, tolerant, and very well behaved.  She accepted any dog into our home with graciousness.  Never a stern look or word.  Simply put, she knew when it was showtime and she was above all, an actress, a show dog, but we knew that about her and so did her friends. She is joy to live with, was a fantastic mother and is a gracious host!  Belle retired with 7 Best In Shows and 42 Group Wins.