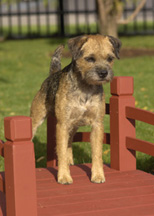 Killian began his career at the tender young age of 6 months.  He finished his Canadian Championship in one weekend under the expert showmanship of Junior Handler Noora Haapanen who happened to be visiting Al and Joanne Matheson in Canada.  Noora is from Finland.  Killian came back home shortly after that and was readied for his debut at the Border Terrier Club of America 2005 Specialty.  Killian took back to back 5 point majors that weekend and doing so with style!  He went BOB over specials that weekend under judge Chris Levy and then went on that day to take a Group 2.  On to our specialty where he aced Best Bred By Exhibitor, Winners Dog and Best of Winners.  I couldn’t have been more proud of this up and coming youngster who was still yet to be a year old.

Off to Philadelphia in October to MCKC and Hatboro.  Killian was BOB at Hatboro under Mr. Edd Bivin and then was awarded a Group 4 under Mr. Ken Kaufman.  Killian was only the second Border Terrier in history to get a Group placing at Hatboro Kennel Club and only 14  months of age back then.

On to the Eukanuba National Championship on January 12, 2006 in Tampa, Florida.  He does it again, defeating the top Border Terriers in the country to be awarded Best Of Breed by the renowned Mrs. Michelle Billings.  An honor to be given this award by such an esteemed, well respected judge.  Killian made his debut at Westminster Kennel Club in February of 2007 and was given the first Award of Merit by breeder/judge Mr. Ronald K. Irving of the Dandyhow prefix.

Killian is retired with 42 Champions of record. He is in our hearts and remains here at Meadowlake chasing squirrels and tormenting the neighbors!