Leonard is a beautiful young dog with an outstanding future.  Already winning Best of Breed judged by Mrs. Charlotte Patterson, at the Eukanuba National Championship and going on to win the Best Bred By Exhibitor Terrier Group under judge Dr. Jerry Klein. And then an amazing Best of Breed at the 2016 Westminster Kennel Club Dog Show at Madison Square Garden judged by Mrs. Betty-Anne Stenmark and going on to a record setting GROUP 2!!  No Border Terrier in history in 140 years has ever achieved this accomplishment.  We are so proud of this boy and we hope the best is yet to come!  He is bred by Karen Fitzpatrick and Sandra Moore DVM, and loved by our team of Kay Richardson, David Fitzpatrick DVM, Doug and Sue Tack, Kiki Courtelis and Karen Fitzpatrick.   He is out of Maya’s litter sister, Group Winning GCh Meadowlake Simply Irresistible and by American/Canadian GCh Meadowlake Smash. Making his debut in January of 2015 as a special with my dear friend, handler extraordinaire, Simon Simaan, he sky rocketed directly to the top of the charts, and was the #1 Border Terrier in Breed Points in 2015. Partnering with his kennel mate BIS BISS GCH Meadowlake Pants on Fire finishing on top in All Breed points for 2015.

Leonard exemplifies breed type with his phenomenal otter head (just voted BEST OTTER HEAD at the 2015 Sacremento Dog Show in April 2015 at the BT supported entry show and also at the BTCA National Specialty, among a few!), lovely size and balance and sound movement.  In today’s Border Terrier, I feel many breeders are losing underlines and head type and if continued in this fashion, we will lose the breed standard as it is written.  Chests are continuing to be to deep, thus causing to much tuck up and underlines are distorted, muzzles elongated, losing our 1/3 muzzle to 2/3 top skull ratio.  Some male Borders are 20lbs or more, much to large for a male BT in my opinion.  Leonard brings back that much needed look and size.  As the saying goes, it doesn’t matter how pretty they are getting to the fox hole if they can’t fit in to do their required job.  Leonard has everything to break all the records for a Border Terrier and I’m so excited to see what 2016 will bring.  Already in his first out this year, Mr. Peter Green, terrier man extraordinaire, gave Leonard a Group One in his debut and Ms Beth Sweigart awarded him Reserve Best In Show!!!!

Leonard has all clearances. He will be 3 years old on St. Patricks Day!!   Eyes normal, patellas normal and OFA Heart normal, OFA Hip Score is Good.  I would be happy to forward any of these at your request.  Standing at stud to approved bitches. 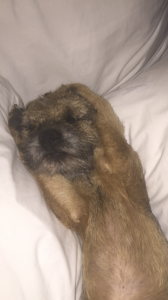